In About Life, About People

Peter F. Morneault
I believe angels surround us and they present themselves in the most unlikely circumstances. I am blessed to have witnessed the example I feature in this post.
The Coast Guard Academy (CGA) Bears’ Men’s Basketball team squared off against their formidable Division III opponents, the #7-ranked MIT Engineers. Being a supporter of the Bears, I was cautiously optimistic, but hopeful they could win. 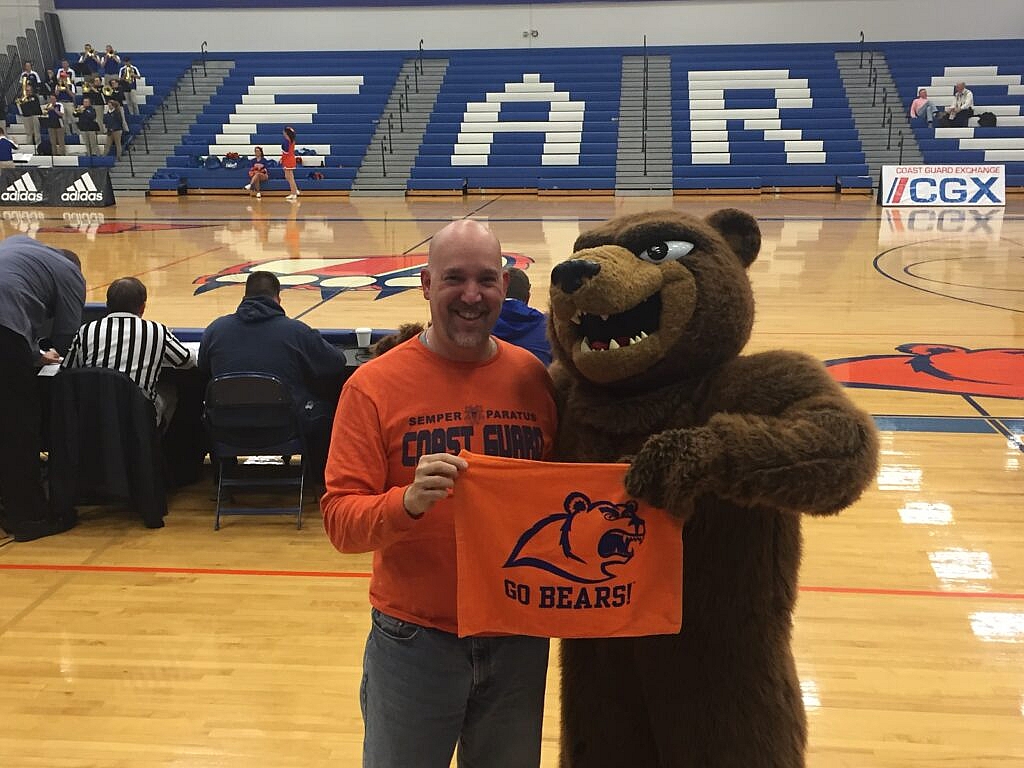 Early in the game, Coast Guard’s team-chosen captain took an elbow to the head splitting his scalp. The resulting wound left the servant leader looking like a character in a horror movie as blood streamed down his face. No foul was called, but the captain was forced to leave the game for some repairs.
The team trainer applied a medical-grade super glue  to close the open wound, but she could not contain the anger and frustration of the angry Bear who held an ice pack on his head while sitting at the end of the bench.
Without CGA’s servant leader on the court, MIT proved their worthiness as a ranked team and disrupted the rhythm of the home team. The Bears played valiantly and trailed by just 10 points at the half – a reasonable deficit to overcome if they could just get it together.
At the beginning of the 2nd half, with their captain’s return to the court, CGA looked re-energized and ready to make a run. MIT played hard, real hard and they knocked the Bears’ captain out of the game for good with a knee injury.
The Engineers capitalized on every mistake and missed opportunities the Bears made while making very few of their own. They increased their lead over their once again deflated opponents.
And then the air left the entire arena in a terrifying and horrific accident!
While battling for a rebound, a Bear and an Engineer crashed to the floor with a dense and reverberating thud. All the players on the floor stopped and all members on the bench of both teams stood in concern.
Panic quickly followed as the Engineer lie motionless on the floor. Players, trainers, and coaches surrounded the player. Chaos ensued as the MIT captain convulsed and clutched in desperation to his opponent who lied on top of him.
Multiple cries of “Call 911!” echoed. Parents and teachers ushered their grammar school-aged children, who were in attendance for a school function, out of the building. An EMT-trained Coast Guard player ran to a nearby hallway to secure a heart defibrillator. Upon re-entering the gym, he unintentionally bowled over a few confused and anxious children.
Pandemonium.
I immediately pulled a crucifix from beneath my clothes, clutched it firmly, and prayed.
Oh dear God! Send us an instrument of your peace. I call to you archangels and all the angels and saints. Archangel Michael, come quickly and protect us. Help us! Our Father… Hail Mary…
A blond-haired woman with a vibrant electric blue-colored blouse (Coast Guard color) knelt down beside the young man and placed her hands beneath his head. He bled profusely. While chaos twisted like a tornado around her, she calmly took control and directed people to assist her. She experienced the same scene as others, but saw a different view.
She shouted, “I need towels. I’m a pediatric ICU nurse. I need towels. Now!”
Players from both teams scrambled in gym bags, under carelessly discarded warm up suits, and beneath ice water coolers obtaining the requested towels.
Our Father… Hail Mary… Please God, bestow your healing hands through the woman in blue. Our Father… Hail Mary…
The injured young man stopped convulsing. The lady in blue talked to the MIT player while supporting his head.
After she transitioned responsibility of the player to paramedics, the woman calmly walked toward the injured captain of the Bears who sat on the floor, in disbelief. You see, he had developed a friendship and healthy respect with his counterpart on the opposing team over the years. The woman in blue leaned sat on the floor, leaned against a padded wall next to the captain, and put her arm on his leg in a gesture of comfort. The captain is her son.
This “Momma Bear” cared not only her own cub, but she protected the child of an Engineer’s mother. Without question. Without judgement. Without hesitation.
With the injured player safely en route to a nearby hospital, an announcement came over the PA system. “Ladies and gentleman, both schools have agreed to call the game. The final score is MIT 69 and Coast Guard 54. Drive home safely.”
The MIT team (players and coaches) gathered at center court in a circle and locked their arms together. A single player stood in the middle of the circle and lead them in prayer. The entire Coast Guard Academy team joined MIT in a show of goodwill, sportsmanship, and faith.

No Bears vs Engineers. No unranked vs #7. No Seniors vs Freshman. They were not Catholic, nor Muslim, nor Jewish. Not white, black, Asian, or Hispanic. They were not opponents, foes, or adversaries.
I continued to clutch my crucifix and wiped tears from my cheeks.
Thank you. Thank you for listening. Thank you for sending help. Thank you.
After washing up in the rest room, the woman in blue overhead a frantic woman talking on a cell phone and she asked, “Excuse me, are you the boy’s mother?”
“No, but I am speaking with her right now. Would you be willing to speak to her?”
“Yes, of course.”
My soul was shaken after seeing the woman in blue move toward the chaos and not away from it. She never panicked, she never lost control, and her pinpoint focus brought peace-of-mind to 100s of people. She was instrument of God’s peace I prayed for. She used her hands as an earthly angel of protection and healing.
To the mother of the MIT player, perhaps the woman in blue is some sort of superhero. To the coaches and staff of the CGA, perhaps she is a life-saver. To the CGA basketball team, she is their kind-hearted, most vocal, and loudest cheerleader. To the MIT team, they may never know who she is. To CGA’s captain, she is likely “Just Mom being Mom.”
To me, she is my big sister. And the captain of the Bears is my nephew, Justin.
I share this story because I believe we all have an ability to be a difference maker in this world. If we cast aside our doubts, our fears, and take action rather than waiting for someone else to handle a situation, we can be the change we want to see in the world.
Be the best version possible of who you are. Confidently be your authentic self, regardless of what profession you work in. Be who you are to the best of your ability. We all fall down. We all make mistakes. We all hit rock bottom. We all can pick one another up.
Ask yourself, “How can I help? How can I serve?” The more frequently you unselfishly give of yourself, your experience, and your talents to others, you will find that blessings will be bestowed upon you.
You too, are an earthly angel. The opportunity to spread your wings and wrap them around someone to protect them is coming. And I promise you, you will never see it coming. But, I hope you will move toward the chaos when the time comes.
Be Kind. Be Thankful. Be Significant.
Peter
P.S. The CT scan for the injured MIT showed no considerable damage. The hospital released him the following day and he missed most of the rest of the season. He and Justin maintain their friendship despite both having graduated from their respective schools.

“Do Nothing, yet nothing is left undone” A Shepherd for Charity I am a multi-passionate, quiet, and unassuming force for change. I've been happily married to my wife, Cathy, since 2002. We live in Connecticut with a pack of dogs and a pride of cats. Fur is a food condiment and a fashion accessory in our house!

Within you, exists a power to change lives. I beg of you to respond when someone calls to you for...